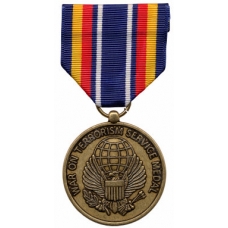 Authorize for those individuals who either directly or indirectly supported the designated operations. Individuals must have participated in or served in support of the Global War on Terrorism-specified operations on or after Sept. 11, 2001 to a future date to be determined: Airport Security operations (OSA – Sept. 27, 2001 to May 31, 2002); Operation Noble Eagle (One), Operation Enduring Freedom (OEF), and Operation Iraqi Freedom (OIF). Termination date for Operation ODYSSEY LIGHTING is now Jan. 17, 2017 instead of Dec. 19, 2016.

-While participating in the specified operation, regardless of time, is killed, wounded or injured requiring medical evacuation.

Personnel supporting the Global War on Terrorism in a non-deployed status, whether stationed at home or overseas are eligible for the GWOT-S. Examples of this support include: maintaining/loading weapons systems for combat missions, securing installations against terrorism, augmenting command posts or crisis action teams, and processing personnel for deployment in support of the Global War on Terrorism.