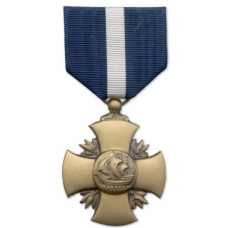 The Navy Cross is the second-highest military decoration for valor that may be awarded to a member of the United States Navy, U.S. Marine Corps, or U.S. Coast Guard (when operating under the Department of the Navy) for extraordinary heroism in combat. It is equivalent to the Army's Distinguished Service Cross, the Air Force's Air Force Cross and the Coast Guard's Coast Guard Cross.

The Navy Cross is bestowed by the Secretary of the Navy and may also be awarded to members of the other armed services, and to foreign military personnel while serving with the U.S. naval services. The Navy Cross was established by Act of Congress (Public Law 65-253) and approved on February 4, 1919.