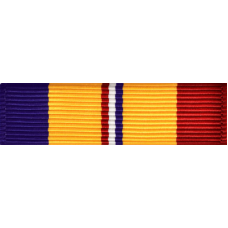 This is an individual service award. It may be awarded to members of the Coast Guard in the grade of Captain (O-6) and below who actively participate in ground or maritime combat.

The principal eligibility award criterion is satisfactory performance under enemy fire while actively participating in a ground or maritime engagement. Neither service in a combat area nor being awarded the Purple Heart (or a combat award or badge from another Service) automatically makes a service member eligible for the USCG Combat Action Ribbon.

A direct exposure to the detonation of an improvised explosive device used by an enemy, with or without the immediate presence of enemy forces, constitutes active participation in a ground or maritime engagement. Personnel who serve in clandestine or special operations, who by the nature of their mission are restricted in their ability to return fire, and who are operating in conditions where the risk of enemy fire is great and expected to be encountered, may be eligible for the USCG Combat Action Ribbon. The ribbon will not be awarded to personnel for aerial combat; however, a pilot or crew-member forced to escape or evade after being forced down may be eligible for the award.

Personnel who have previously earned the Navy Combat Action Ribbon, the Air Force Combat Action Medal, or the Army Combat Infantry/Medical/Action Badge for actions on or after May 1, 1975 must request authorization to be awarded the USCG Combat Action Ribbon. Requests will be individually reviewed and acted upon based on their merit.